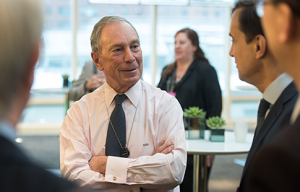 He is an entrepreneur and philanthropist who served as mayor of New York City from 2002-2013 after leading the company he started in 1981 for 20 years. Since leaving City Hall, he has resumed leadership of Bloomberg LP.

Bloomberg was elected mayor less than two months after the terrorist attacks of September 11, 2001. Under his leadership, the city rebounded faster and stronger than expected on issues ranging from education to health to economic development.

A lifelong philanthropist, Bloomberg founded Bloomberg Philanthropies, which focuses on five main areas: public health, education, the environment, the arts, and government innovation. He also leads a number of bi-partisan coalitions on urgent issues, including climate change, illegal guns, immigration reform, and infrastructure investment. In January 2013, he made the $350 million gift that established the Bloomberg Distinguished Professorships and provided undergraduate financial aid.