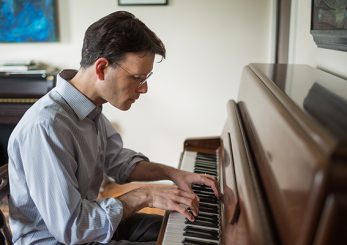 A composer at the Peabody Institute, Michael Hersch has built a significant international reputation as major orchestras, chamber ensembles, and soloists around the world have commissioned and performed his works. He is known for challenging listeners and performers with works of great complexity, audacity, and empathy, and has received many notable composition awards, including the Berlin and Rome Prizes, and accolades of music critics and audiences.

“There is no doubt that Mr. Hersch is one of the most gifted composers today, as evidenced by his artistic output, accolades and awards,” says Peabody Dean Fred Bronstein. “Given the immensity of his talent, his productivity, and his every increasing stature in the classical music world, I can think of no one more deserving of the President’s Frontier Award.”

Finalist: Xin Chen, an associate professor of biology in the Krieger School of Arts & Sciences