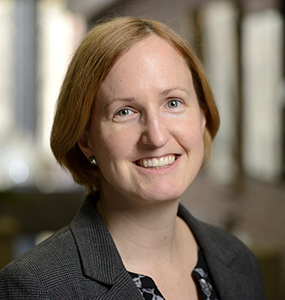 Sabine Stanley is a world-class planetary physicist focusing on magnetic fields as a means of studying the interiors of planets, including those in little-understood realms light years away from our solar system. She is grappling with one of the most elusive questions of our universe: how planets work.

Stanley’s research is focused on planetary magnetic fields, dynamo theory, interior structure models and other geophysical methods to learn about the deep interiors of planets. Her work includes projects on many solar system bodies—planets, asteroids, and planetesimals—as well as exoplanets, planets outside the solar system. To explore these areas, she uses a combination of numerical simulations, theory, and comparison to observations from various missions. Stanley’s lab is currently studying planetary magnetic field generation using high performance computing. Investigating planetary magnetic fields reveals important information about the thermal history of a planet, its interior structure, and the fluid motions occurring in the core. Stanley is also working on the Mars InSight Mission, which aims to understand the interior structure and processes of Mars by measuring marsquakes (earthquakes on Mars), Mars’ heat flow and rotation.

Stanley joined Johns Hopkins University as a Bloomberg Distinguished Professor in 2017 from the University of Toronto.